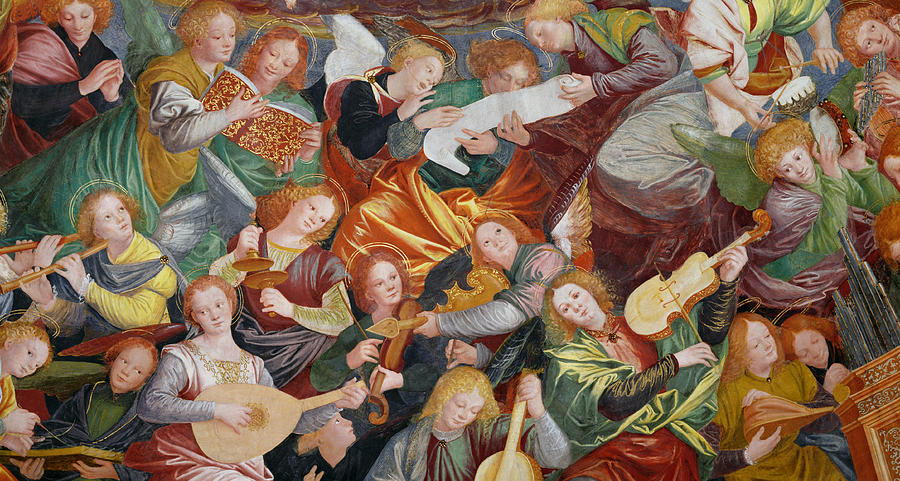 Although we may not be able to know when the first viola of all was born (as we may recognise today), it is in the 1530s that the instrument was first recorded in history, painted in a fresco by Gaudenzio Ferrari in the Santuario di Soronno in Milan together with its numerous family. What we need to understand is that the viola family, whose name had derived from the Medieval French vielle, in the end simply meant stringed instrument and that this family englobed all stringed instruments present at the time.

The Renaissance is the golden age of polyphony. We can therefore interpret that inspired by choral music, it had become common to experiment with the different sizes and shapes of all instruments with the end of doubling the voices in performance or otherwise called, to play colla parte.

It is interesting to observe that before the distinct names of the instruments (violin, cello…) came about, a clear distinction was made between the instruments played on the shoulder “da braccio” and the ones played on the leg “da gamba”. And within these big categories the instruments where called according to their voice in an ensemble like in a choir: soprano, alto, tenor and bass, from which the violin was the soprano and our viola the alto, tuned a fifth lower than the soprano.

In the 16th and 17th Centuries, besides the alto voice, also the tenor voice was originally played by a viola da braccio, together with a fifth voice but tuned and sized differently. Also the cello belonged to the da braccio family although it was played vertically!

Many times we search to bring justice to our instrument by comparing them to others in our own family, searching for confort in trying to prove that our name happened first in history or that it might have been once more popular. However, what we can certainly rejoice is that it is an instrument that plays its own important role in keeping a family in balance.

Adventures of a Cello by Carlos Prieto, Chapter one